Cole Alpaugh, novelist
A tsunami sweeps across a South Pacific island killing everything but an old sea turtle and the girl clinging to its shell. 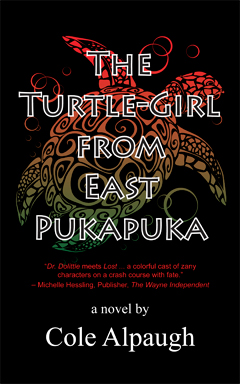 A giant wave rolls over tiny East Pukapuka, annihilating everything but an old sea turtle and the ten-year-old girl clinging to its shell. The child is plucked from the currents by a salvage captain named Jesus, who hums Verdi’s Rigoletto while blissfully peeing into the wind and would rather swap the blubbering snot machine for spark plugs than help her find home.

The island’s newest residents include a pair of hapless Fijian cocaine thieves, and a brain-damaged world class ski racer whose memories of home have been replaced by travel channel reruns. Looming on the horizon is a vicious member from a cannibal tourism act who’s been hired to retrieve the coke and produce a gruesome three-course video. The returning orphan girl is a niche connoisseur’s al la carte dream.

Hoping to reclaim an island oasis lost to the sea, the recent arrivals must survive a showdown against pure evil that is armed with a knife, fork, and a finger bone necklace clattering in the wind.