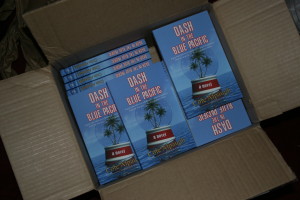 Okay, here’s the deal for my closest friends and allies … I have a couple dozen advanced copies of my new novel available. It’ll be first come, first serve for anyone in exchange for an honest review on either Amazon (to review on Amazon you need an account and to have made a minimal purchase at some point), or GoodReads.com. Second caveat is that the (however brief) review be posted during the first week of April. Send me an email at [email protected], or private message me on Facebook.

What’s it about? Well, here’s the review from ForeWord Magazine in its entirety:

“Surely Dash’s run of bad luck must be winding down. He’s lost his job and fiancée and finds himself alone on what should have been his honeymoon flight from Vermont to Australia. What else could possibly go wrong? Lots of things, as it turns out. In Cole Alpaugh’s darkly comic and richly layered Dash in the Blue Pacific, the defeated Dash never makes it to Sydney but instead crashes in the South Pacific. What seems like a near-death experience at first is actually the beginning of a mind-bending, life-changing journey for a man at the end of his rope.

Dash’s adventures begin with a familiar trope: a man washes up on a remote island’s beach, worries that the natives will eat him, and plots his escape. In Alpaugh’s hands, however, the story is anything but stale. Instead of building signal fires and rafts (though these will come), Dash is preoccupied with a tribal chief who wants to feed him to a volcano, women who want his help to make the island’s first white baby, and a young girl who hopes to escape the island with the “soldiers” who sometimes come to her shores looking for the prettiest among them. And then there’s the former god Dash spends many hours consulting with, a half-fish, half-man mind reader named Weeleekonawahulahoopa—Willy for short—who has resigned his godly role after failing to save his people from drowning. It gets weirder after that.

The weird parts work because Alpaugh integrates them into a story that is physically raw and wickedly funny. Dash is as incredulous about all that is happening as anyone, and his self-conscious skepticism keeps the magical elements from seeming off-the-wall. Little by little, Dash’s conversations with Willy reveal Dash’s deeper emotional wounds, and offer another interpretation for his dreamlike visions.

Taken simply as a comic adventure story, Dash in the Blue Pacific is thoroughly entertaining. When you consider the other elements—racial tensions, human grief, and spiritual redemption—it takes on new levels of meaning. Book clubs will be talking about this one.” – Sheila M. Trask, ForeWord Magazine