So this nice young guy from up in Vermont is having a bad week. Catches his fiancee ‘under’ the dude who runs the town snow plow. Widowed mother will only talk to the nine porcelain baby dolls living at her dining room table. He’s fired for doing an excellent job. And while taking his honeymoon alone the engines of the jetliner go dead silent 35,000 feet over the South Pacific.

Surviving the crash might be the easy part, considering an eight-foot tall naked guy with the head of an angler fish just sat down on the lava bench next to him.

DASH IN THE BLUE PACIFIC won’t hit stores for another 202 days, but I’m incredibly happy to share the bright, shiny new cover just forwarded to me by Catherine Treadgold, publisher at Seattle’s Coffeetown Press.

And now for the cover … 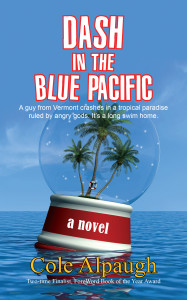