Walking in the Woods with a Killer 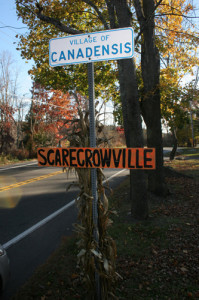 BARRETT TWP. – Today was sunny and almost 60 degrees in our part of the Poconos. I told my wife that it was a pretty afternoon for a long walk in the woods. Alone, I said. Just a couple of cameras and a bottle of water. It’s safe, I explained, since hunting is currently banned in Barrett Township where the accused killer’s family lives.

My oldest daughter got married 43 days after Eric Frein is accused of killing Cpl. Bryon K. Dickson II, 38, Dunmore, and wounding Trooper Alex T. Douglass, 31, Olyphant. The crimes occurred 45 days before my younger daughter was running late and missed the school bus. Mom had to drive. Police are still searching for Frein. The events aren’t connected, of course. Just horrible, wonderful, and slightly frusting things that recently happened. And all made for a good reason for a walk through the woods.

Sometimes I miss being a journalist. I peek at the online newspapers until a pop-up window tells me I’ve exceeded my monthly free visits. The Wayne Independent is filled with stories about people I know, while the Scranton paper gets the local sports posted online fast. There sure weren’t live updates of high school football scores when I was chasing stories. And seeing the credit line of one of the Times-Tribune photographers makes me do a double take because his dad was one of my heroes when I was starting out. Fred Comegys was – and is – the best photographer I’ve ever known. It really is a small world.

I don’t have interest in the $175,000 reward posted for Frein. I’m a photographer, not a bounty hunter. What if you find him, my wife asked. Will you call the police? I’m not taking a cell phone, I said. I figured the news editor I’m trying to sell the pictures to would call police. But that’s not really any of my business. For background, I used to cover wars, and the job is to present images and facts to people who buy your magazine or newspaper. You aren’t there to take sides. In fact, taking sides is one of the reasons so many journalists have been killed over the years, but that’s a subject for another time. The bottom line is that you have to work with the assumption that someone is likely not going to kill you if you don’t pose a continued threat. You might surprise them, which is a dangerous moment, but someone you come across in a sniper position doesn’t want to pull the trigger unless he has to. Guns are loud.

I picked a spot for my hike from a Google Earth map. I know the area around Canadensis fairly well. When you’re facing a needle in a haystack, you mix what you know with your gut feeling. I took a 90 minute, sixty mile perimeter drive, as well. I always felt more comfortable in a war zone if we were inserted after a helicopter sweep, rather than marching into a jungle. You are less claustrophobic, and you have a better sense of the terrain.

Deep in the woods of Barrett Township, a few thousand feet where Frein allegedly took the gun he used to attack officers, there are countless squirrels readying for winter, and even more birds making angry territorial cries. There are hundreds of dark stumps that look like mad-men. There are trees that cast shadows that look like prone bodies, and some of the remaining leaves catch the light with the same reflective quality of a rifle scope. I walked in twenty minute intervals, stopping to listen for five minutes each time. It was something I learned to do when hunting Contras in Nicaragua. You go to a place where they might walk right up to you, the Sandanista commander had said. Then you go to another place. Do it enough times and boom, he said, shooting an invisible rifle with his hands.

I didn’t see a single cop, nor did I see the weather balloon-like contraption they’re now using. It’s outfitted with some kind of spy technology, like slow moving drones, I suppose. The area campgrounds and parks are empty, but people are in their yards doing chores. A pretty teenage girl was rough-housing with a Golden Retriever, and she waived when she looked up.

The woods around Frein’s family home are quiet while you are walking, but noisy for those five minute stops. Falling leaves sound like marching boots if you listen too closely. Each breaking twig is the approach of a cold-blooded murderer. Those dark stumps just about drive you crazy. I swear, every single one was Eric Frein for a second or two, long enough to begin raising a camera.

It’s also a comforting hike because of the thick brush and changes in elevation, gullies and open trails for power lines. Walk far enough and there’s a house with a barking dog. The proximity to roads make it unreasonable that our outdoor sports were ever cancelled at Western Wayne High School. Our tennis courts were a million miles away from the trail of overturned leaves I followed for a few hundred yards.

Maybe Frein is still in those woods. If I walked right past him, then I’d like to thank him for not shooting me, although I know he was only making the correct tactical decision. But for what he’s done to the families of the officers, I sure hope he makes a fatal mistake. 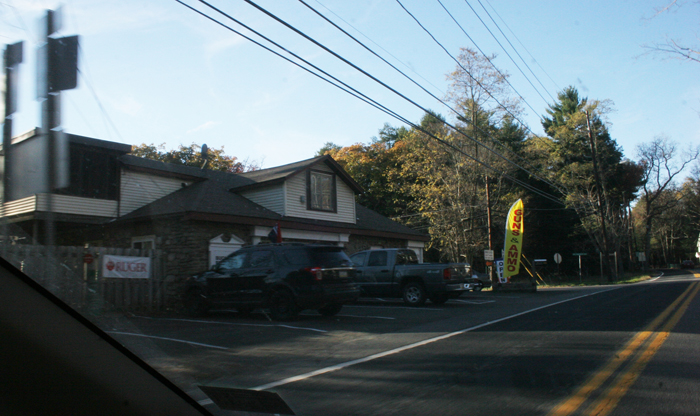 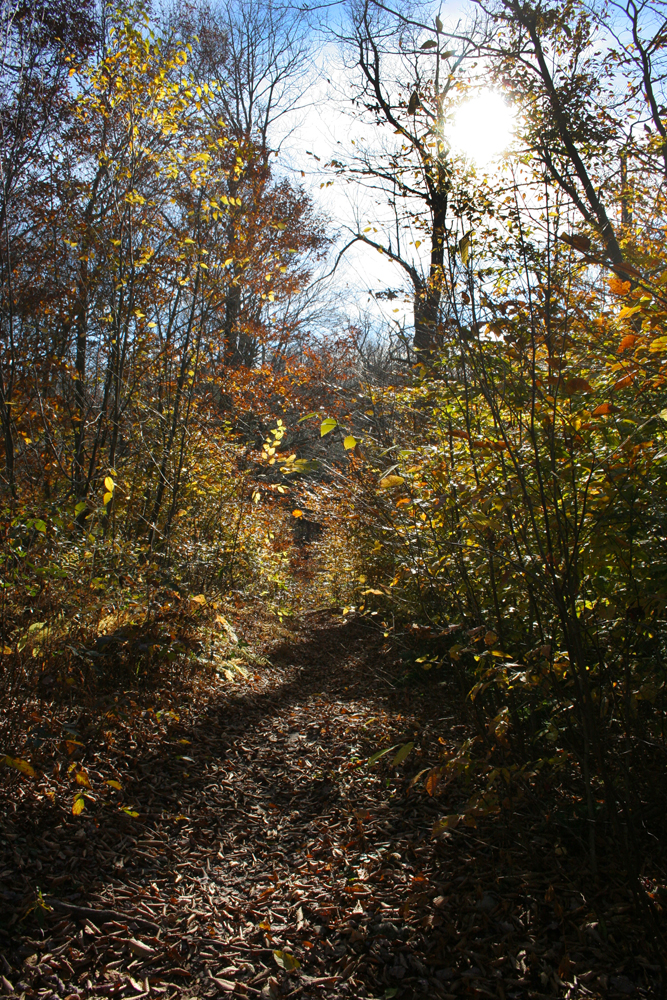 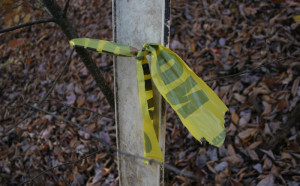 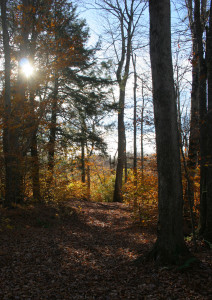 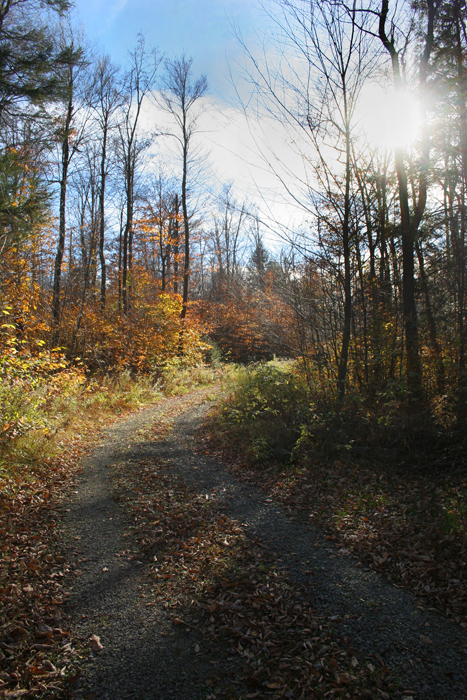 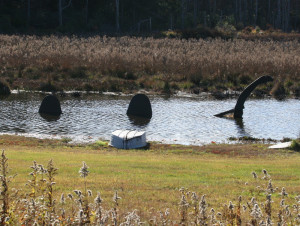